Sophia woke up with a start- sleeping in the day was never enough to make up for a good night’s sleep. Plus she did not have the luxury of sleeping for 6-8 hours like her colleagues who worked in the call center at night and slept in the day. Sophia was a mother of  3 year old Diya. After a hard night at work, taking calls for 8 hours, listening to irate foreigners who complained about the product and the pathetic customer service, pacifying them, maintaining her calm- her ear drums felt like they would burst and her parched throat added to the agony. Like the rest she waited to board the office cab and come home.

She couldn’t afford to sleep once she set foot at home, she had to prepare her toddler’s lunch box for school and breakfast.

Diya was up early- bathing her, feeding her, sending her to school took up the morning. Finally after Shrikant had woken up, had breakfast and left for God knows where, did she have some time to catch up on sleep.

She had learnt to make the most of these few hours to get some uninterrupted sleep. She drew the thick curtains to prevent any light from coming in, switched off the call bell and wrapped herself in a thick blanket. The alarm clock showed 9 am which meant she could sleep till 1.

Today, despite the pain in her bones and the stress of meeting the expenses till her pay check arrived, she was happy. It was Diya’s birthday in a day and her parents were coming from Kerala.

She had planned a party for Diya and her friends. There was a lot of work to be done. As usual she would be doing it alone. Shrikant would come out with some lame excuse like “You are so good at planning all these things, I will only mess it up. Better I don’t interfere”. He wouldn’t pay up one penny either, she had to cough up all the money for the party. Not that she minded doing it for her child but as a father, didn’t he have some responsibility towards his family.

She had realized his true colors very late. By then the damage had been done. At 21, smitten by the love bug and an overdose of SRK movies, the naive Sophia had eloped with Shrikant. They had fled the conservative, sleepy village in Kerala and migrated to Mumbai. In search of a new life, happiness, love, money where the fact that they were from different religions and backgrounds did not matter. Sophia’s family was shocked and they refused to talk to her for 4 years. When she became pregnant, her mother convinced her father and the ties were formed again. Wasn’t everything perfect? But the truth was far from that.

A few months into married life and she was slowly realizing the truth. Her husband kept changing jobs every few months. Finally one day he declared that he wants to run his own business. As a dutiful wife she supported him by pledging her jewellery and emptying her savings. The business bombed in less than a year. Being just a graduate, she could only secure a job in a call center. Despite the stress, it paid well and she was thankful for this.

He sat at home for a few months planning about his next venture and then came up with a new proposal. This time he requested her to take a loan, as she was working and she ended up taking a 5 lakh personal loan for him. She was still repaying that loan- this venture had lasted even shorter than the earlier one.

She was practically running the family. She had discovered that she was pregnant and after 9 months Diya was born. She had hoped their daughter’s birth will change him but this just remained a hope. She now had the additional responsibly of caring for her daughter and planning her future.

After working in the strenuous atmosphere of a call center for 5 years, her health had started taking a toll. Apart from the job stress, she also had to worry about the finances, tiding through the next day without the loan sharks coming knocking at the door. She had 2 abortions  in the past year and this had caused a severe dent in her health.

Outwardly everything looked fine, they were a happy family. Despite belonging to 2 different religions- she a Christian, he a Hindu Brahmin- they had made a good life together. Or so it appeared.Was this true?

It was Diya’s birthday and everyone was having a great time. Her parents were visiting for the 2nd time, they seldom came to her place. After 2 days of festivities, it was time for them to depart. As she gave her mother a new saree as a gift, there were tears in the older woman’s eyes.

She was not completely oblivious to her daughter’s suffering, in fact she knew everything. “Mole (my girl) the day you were born I made a vow I will bring up my girl in the same way I bring up my son. She will study, play, laugh loudly, and have a right to live her life just as she pleases. She will not sacrifice anything because she is a girl. I will raise her strong, strong enough to stand up for herself and not tolerate any injustice meted out to her by anyone, be that her own kith and kin. Your father’s sister was divorced by her husband and she was always treated as an outcast in the village. Like an untouchable, people said she brought bad luck. You always went and hugged her and told her that you are her child. You never understood why they shunned her. But today, I see the same pain and a fear in your eyes. Fear of meeting the same fate as Paro aunty. Fear that if you raise your voice against your husband and he takes a drastic step like leaving you, will you be meted out the same treatment like your aunt? What will happen to your daughter? Will she have to listen to people’s taunts for the rest of her life? There is no respect for divorced women in our country- and people would say “Look there she is- she eloped with that guy from a different religion. We always said the marriage will break”- do you fear that they will be proven right? Are you happy living in your glass house where everything looks picture perfect from outside but within the glass has shattered and its shards have pierced your soul? It’s your life and I am proud to see how well you are taking care of your girl and fulfilling your responsibility. But don’t forget that you owe something to yourself too. By succumbing to injustice meted out to you, you are not only inflicting harm on yourself but little Diya too. Remember the kind of example you are setting before her- a young and impressionable mind that is- don’t cause any such damage that can’t be repaired for life. You are matured, much more than your age and all I can do is ask you to remember the ideals on which you were raised and take the right decision.

With that, her mother left leaving her in a confused state of mind. Whatever her mother had spelt out, was stingingly true. It was like her inner self speaking to her. The fear of being deserted by her husband and living the life of ostracism was what was stopping her from raising her voice.

The next day-she did not sleep after her night shift. She made a few phone calls to his and her family in Kerala and blocked the credit card which was she had taken in his name. Her mind was clear now, she knew things would fall in place- not in the way she had always thought but it would lead to something good for her and Diya.

I am participating in  The Write Tribe Problogger October 2017 Blogging Challenge. The prompt for today is “You can choose courage or you can choose comfort but you cannot have both” 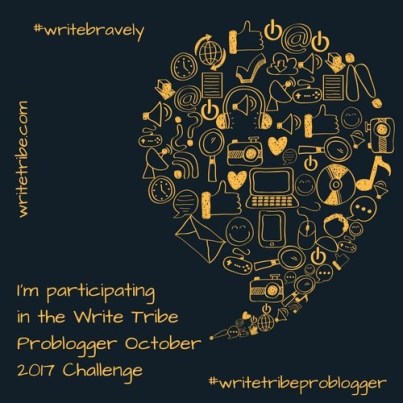