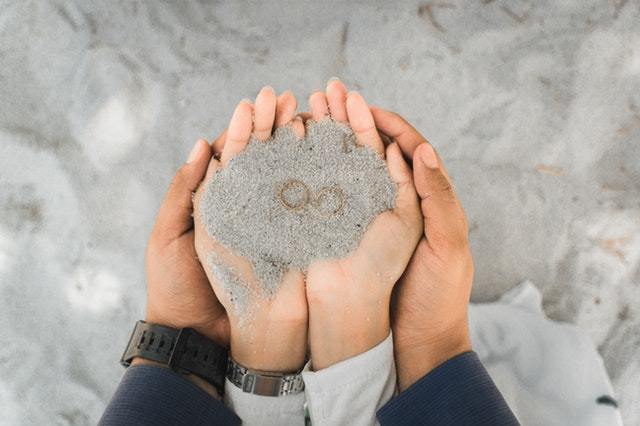 Sanya held a fistful of white sand in her hand and then let it go. She watched as the sand slipped through her fingers and touched the ground. It seemed like she had no control over the sand slipping through her hand, just like she couldn’t control time that had slipped out of her hands. Those wonderful moments spent with Sahil which now seemed a distant dream. She yearned to soak in them, feel them once more just once but she knew it was gone, forever. Just like her bare hand, bereft of the sand.

Her mind wandered again and it was a sign. She shouldn’t let it stray as the pain of coming back to reality would be too much to bear. But just once she thought. The immense joy it gave her to think of those times.

The times spent with Sahil, nestled in his arms as they sat on the beach, holding hands and letting the sand seep through. The day he bought that platinum love band for both of them was the happiest day of her life. They spoke of their dreams, desires, they laughed like lovestruck teenagers. With him, she found a new voice. She no longer had to hide her feelings within. She could talk about anything and everything without any inhibitions.

So different from her relationship with Atul. They lived in the same house, ate food at the same table, slept on the same bed but their hearts were so distant from each other. For the world they were husband and wife but they knew this was just a facade. Atul was so immersed in his career that he never found time to have a conversation with her. Her bottled up emotions finally found an outburst in the form of Sahil. Maybe their relationship was immoral for the world, but she knew all that mattered to her was her happiness. She had tried to do her best, make her marriage work.

It takes two to tango. Without any involvement from Atul, she had now given up and she focussed her energy on the thing that mattered the most- her happiness and that was in spending time with Sahil.

“Sanya I have been looking for you everywhere, here you are again” she turned and saw Atul who was trying to smile but she could sense the tension in his voice. Perhaps another business deal thats got into sticky waters she thought to herself.

Atul tried hard to maintain his composure but every time he saw Sanya he couldn’t stop blaming himself.

He led her in, gently holding her hand and helped her with her medicines.

Dr Sharma came and tapped Atul’s shoulder gently. “Don’t be hard on yourself Atul. You are doing what you can, you have left no stone unturned in her treatment. Lets give it time and lets not lose hope”

“The hallucinations have still not stopped Doc. She is still thinking of that make believe Sahil. Its all because of me. I never had time for her, for our relationship. She was stifled and had no one to vent. She always had very few friends and I dint notice when she started behaving strangely. She had a school crush Sahil, years ago. But he moved out and they have never met. She started imaging him as her lover, friend and soul mate. Sometimes I wish he was real. At least she wouldn’t have to face this reality. It breaks my heart to see her like this. I can never forgive myself. I have realised my mistake but I think its too late. ”

He burst into tears as Sanya slept blissfully unaware. She smiled in her sleep thinking of Sahil.

I am participating in the Write Tribe Festival of Words 2018