It was my last day in the city. I strike out the city word. I am not sure if I can call this place a city. It’s some kind of a hybrid between a clusters of villages which was gradually mushrooming into a city. Mangalore a coastal town in south Karnataka which is famous for its educational institutes, the serene beaches , lush greenery, rows and rows of coconut trees, the famous temples and mouthwatering coastal cuisine. This is where my roots lie, where my ancestors lived but migrated to metropolitan cities like Bombay for their livelihood. I grew up in Bombay and spent most of my life in Bombay and Pune with very little connect to my native place. I used to visit Mangalore as a child but as we grew up life got busier and the connection with my native place slipped away gradually.

A sudden change of circumstances necessitated I move to Mangalore. I was 17 at that time. It was more of a forced choice and I had no option but to oblige. Settling down in a new place always has its teething troubles. Moving to this city from a metro like Pune was a big change. The quietness of the place made me eerily uncomfortable. For someone used to the bustling city life, it felt odd.

Then was the language barrier. Being used to Hindi, Marathi and English, communicating in the local dialect was the biggest challenge. I missed my friends, the city like feeling, the cosmopolitan life, the variety of cuisines like chaats, north Indian which I used to savor on. Oh and did I mention the scorching heat and constantly dripping in sweat. I had moved from Pune so it was a paradigm shift.

Overtime I got adjusted to this place. I joined college and made some good friends all from diverse backgrounds. I learnt to savor the local cuisines like char muri (which is a version of bhel puri), dosas, banana pakodas and coconut water which was available in abundance.

And how can I not mention the freshest fish and other sea food which is a divine gift for a hard core sea food lover. This was one thing I couldn’t complain about.

I slowly discovered the beauty of shopping in Hampankatta which is in the heart of the city and has rows of shops selling cosmetics, ladies handbags, clothes and variety of wares.

Another highlight was the yearly exhibition which had a variety of stalls – those selling rajasthani skirts to paithani sarees. The lip smacking snacks and the thrill of the giant wheel where you wait for your pod to go right up and look at the beauty of the city below is what I looked forward to. Visiting the beach and sitting on rocks as the cool wind blew and droplets of water from the sea gently caressed my face – a fleeting image of that still warms my heart.

It was time to go. I had completed my CA Inter exams post-graduation and for my 3 years of internship I had decided I wanted to move to a bigger city for better exposure in terms of work. I decided to move to Bangalore. It was a mixed feeling. To be honest I was more excited about my new life especially as I would start working and earning money. A grown up girl I would be!

But a few days after I settled down in Bangalore which was quite a contrast as compared to the serene city of Mangalore I started feeling those pangs of separation. I yearned for the taste of fresh fish, the fish in Bangalore which is transported from other cities nearby was nowhere close to what I was used to and had got to love. The big malls and multiplex theater drew me in but I missed those days of street shopping in the narrow lanes of Mangalore. The people – this was the biggest asset of Mangalore. Most people in Mangalore were kind, they never failed to smile and that feeling of belongingness is what the city was known for. Despite the language, religion, caste and creed being diverse, from Konkani speaking Christians to Tulu speaking Hindus and Beary speaking Muslims- these diverse people merged into one so seamlessly that their differences never stood out as a sore thumb. I found quite a contrasting situation in Bangalore. While it was more cosmopolitan with people from North, south east and west India most stayed confined to their homes. They had migrated to the city for jobs or education and a full time job or college kept them busy. The doors were shut and a different silence prevailed here.

It’s been more than 10 years now that I moved out from Mangalore and while I do not have any plans of settling down there again, I shall always have fond memories of my native place- the fragrance of the mud, the unadulterated air, the cool breeze, the vast expanse of sea, the mouthwatering coastal food – the city I left is etched in my mind as a beautiful memoir.

‘This post is a part of Write Over the Weekend, an initiative for Indian Bloggers by BlogAdda.’ 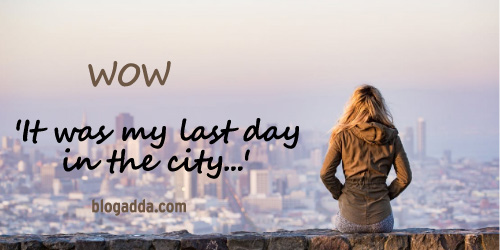 This post was chosen among the top entries and has won the coveted WOW badge! Elated to flaunt the WOW badge on my post. Thanks team Blog Adda